Known as EWOT ( Exercise With Oxygen Therapy ), this is a therapy that uses light physical exercise as a platform to oxygenate a patient’s bloodstream.

A oxygen mask is worn during the activity which helps to quickly send oxygen through to the capillaries. This has been proven effective in cancer care simply because cancer cells have a hard time existing in an oxygen-rich environment. In cancer treatment, the oxygenation process helps to saturate the blood with oxygen during light physical activity.

EWOT combines exercise that increases circulation and oxygen therapy, which is delivered systemically through the increased blood flow.

Cancer cells thrive in oxygen-depleted conditions. As long as the cells are able to thrive in that environment, there is no long-term positive change that can be expected. With EWOT, the body is able to create an oxygen-rich environment. In effect, it is more capable of fighting off illnesses. For patients undergoing chemotherapy or radiation, EWOT can help expedite recovery and minimize the toxic effects of these conventional treatments.

EWOT also helps the body function at its best. This therapy improves overall health by getting the heart pumping and delivering oxygen to healthy cells.

Another EWOT benefit is an increase in energy levels, which tends to become a challenge for people battling cancer. Regular and guided sessions can help patients improve endurance and kick start the immune system.

Another main purpose of Exercise With Oxygen Therapy is to prevent muscle loss, known as sarcopenia. 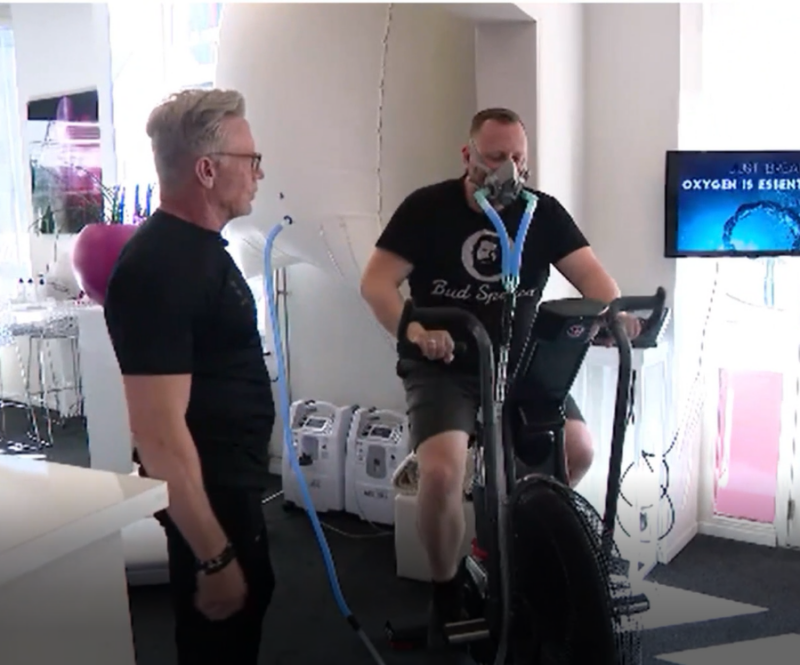 Hyperbaric oxygen is a medical device that requires a prescription, and is a slow process. You can not exercise in hyperbaric chambers. This means that there’s no CO2 buildup to equal the additional inbound O2.

Exercise with oxygen therapy, on the other hand, works to increase your heart rate, allowing you to make more carbon dioxide, increase partial pressure and force more O2 to distal hypoxic tissues. This is a natural process and utilization of O2. Because EWOT increases your heart rate while also increasing oxygen intake, results are seen much faster.

EWOT, has three major benefits, the ability to improve oxygen circulation, restore blood flow and increase ATP production. Here is a breakdown of these three major benefits of exercise with oxygen therapy and how they trickle down to influence overall health and wellness:

1. INCREASES OXYGEN CIRCULATION IN THE BODY

Exercise with oxygen therapy gets oxygen into the arteries, veins and even the smallest capillaries that make up over 74 percent of your circulatory system. By increasing oxygen circulation in the body, your cells are getting the O2 that they need to process the millions of bio-chemical reactions they undergo every day.

According to a 1984 article written by Dr. von Ardenne, improvement of the oxygen flux into body tissues is important for fighting against insufficient oxygen supply, which is a common cause of many diseases, disorders and complains, especially with increasing age.

So why is getting enough oxygen so important? For one thing, research is pointing to a lack of oxygen in the blood (called hypoxia) as a leading cause of many cancers. According to researchers at the University of Georgia, “low oxygen levels in our cells may be a primary cause of uncontrollable tumor growth in some cancers. ” And a study conducted at Washington State University found that when high-pressure oxygen was used on a culture of human leukemia cells, it reduced cancer cell growth by 15 percent.

In addition to increased risks of cancer when blood oxygen levels are too low, research published in Current Medical Chemistry indicates that during hypoxemia, oxidative stress leads to accelerated deterioration, causing our cells to lose their power of division and growth.

All body processes require adequate blood flow, but stress and certain medical conditions can disrupt the blood’s ability to release oxygen into our tissues. We know that a decrease in oxygen supply to your blood can severely damage the function of your brain, liver and other organs. We need our blood to carry oxygen to our tissues in order for all body systems to work properly.

This is another major benefit of oxygen therapy. As oxygen circulation throughout the body increases, our oxygen-rich blood is able to send the O2 to our tissues, vessels and organs.

One of the most well-known benefits of oxygen therapy is its ability to improve cerebral blood flow. Research shows that hyperbaric oxygen therapy can be used to contribute to the healing of ischemic ulcerations in patients with diabetes. It’s hypothesized that this type of O2 therapy works to restore vascular activity, and affects the production of vasodilators and vasoconstrictors.

3. INCREASES THE PRODUCTION OF ATP

When you exercise with oxygen therapy, you are allowing every cell to receive oxygen. This increases the production of ATP (adenosine triphosphate), which acts as a source of fuel within the cells. 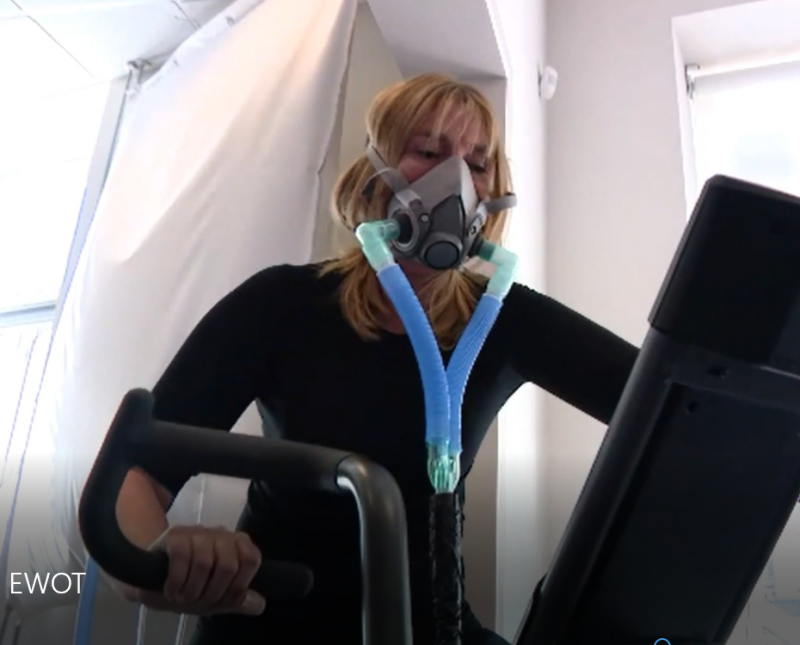 All other benefits of EWOT are downstream cascading effects of these three very important factors. Because exercise with oxygen therapy increases oxygen circulation, restores blood flow and increases the production of ATP, it may also benefit the body in the following ways:

● Accelerates recovery from illness or injury

● Allows for faster recovery after workouts